Harvard Using Goats to Cut Down on Weed Killer

The goats, which are eating weeds and other greenery, are kept in a small, electrified enclosure that allows them to work on one area of the grounds at a time. See also The Best Weed Killers for Lawns

The Arnold Arboretum of Harvard University is clearing space for new plants by having a group of four hungry goats eat away weeds and unwanted vegetation. 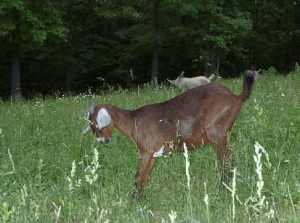 The Arboretum said the goats, which are known to be voracious eaters, are staying in a small, electrified enclosure so that they can work on one area at a time — making room to expand the collection.

The fence also protects the goats from rain and will keep possible predators at bay.

The enclosure will be moved around over the next few weeks so that the whole Arboretum can benefit from the goats’ work, the Arboretum said.

“If this method of biological control proves successful, the program may be expanded in the future and enable the Arboretum to minimize chemical control, reduce moving, and help us keep our plants and environment healthier,” the Arboretum said in a statement.